RLD Consulting is here to help you solve any challenges you are facing. My commitment to you is that we will never take a job unless we believe we can make a true difference for your organization. Our goal is to find creative, effective solutions help drive your business. Call us
You are in the business of saving lives. While saving a life is priceless, it can also be pricey. Our team has extensive experience in both the nonprofit and for profit worlds and can help you take a business-minded approach, so you can save even more lives. Whatever challenges you are facing, we have most likely experienced as well. Please give us a call, we are here to help.

No Kill Jacksonville
A community’s evolution to no kill is almost always long and challenging and usually only successful if a coalition of local organizations supported by the community are working toward the same goal. Jacksonville was no different, and like other communities, the movement is often started by a single individual who promotes and pursues that goal until others come to share the same vision and that is the point it becomes a community effort and success is almost inevitable.

In 2000 Rick had the vision for a No Kill Jacksonville and took that vision to the city by participating in the Mayor’s Task Force on Animal Care & Control of 2001, which launched the city on a course toward no kill. There were many collaborators and vital partners along the way, that without their full participation, success would have been doubtful. But the one constant from that vision of a no-kill community laid out in the Mayor’s Task Force Report for Jacksonville becoming a no kill community was Rick DuCharme. We can assist in developing a plan for your organization, community or region and work with you every step of the way as you implement that plan. 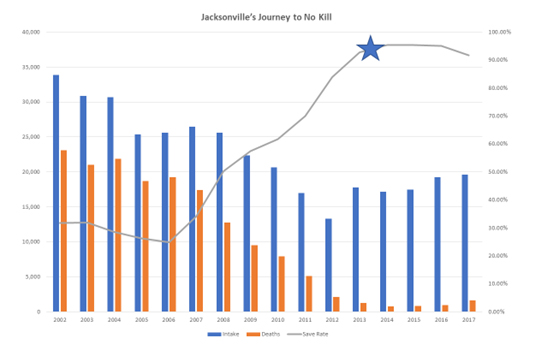 Spay/Neuter Clinic
Rick has extensive experience building and operating spay/neuter clinics. Rick oversaw every aspect of the current location which opened in 2009, including having the vision for such a large clinic, finding funding, design, contracting, equipping and staffing. This clinic has 10,000 square feet of medical space, garage and office space and has produced more than 32,000 surgeries in one year, averages around 22,000 surgeries annually and helps over 20,000 medical patients each year. Before this location, Rick had opened two smaller spay/neuter clinics for FCNMHP and has also helped many others in various aspects of opening and operating clinics.

SpayJax
This is a low-income targeted program in Jacksonville. This program and others have been instrumental in reaching low-income pet owners and providing results in decreasing shelter admissions, particularly seen in dramatic shelter intake reductions of puppies. This program utilizes a dedicated funding source through the counties pet license tag sales and has been replicated around the country. Rick has developed formulas that can help determine required surgery volumes to have impact on shelter admissions. It is not enough to have a program, you must also ensure program utilization for effectiveness.

Feral Freedom
Designing and implementing the Feral Freedom program in 2008 lead to a revolution in the way that shelters nationwide handle outdoor cats that come to them. Under Rick’s leadership, FCNMHP partnered with Jacksonville Animal Care & Protective Services to take all of the Community Cats that entered the city shelter and sterilize, vaccinate and return them to their home territory. This type of program soon became the national best practice for shelters and is known as Shelter-Neuter-Return in most of the hundreds of communities nationwide now practicing it. This program provided a path to no kill for Jacksonville and for shelters nationwide.

Mega Adoptions
Many organizations and communities hold adoption events, but Rick had the vision to take community adoption events to an entirely new level with Jacksonville’s Mega Adoption Events. At their height, these three day, extremely effective adoption events would find homes for over 1,100 pets, emptying area shelters. The formula for making adoption events MEGA developed in Jacksonville is now practiced by groups from all around the country. We can help you make your programs MEGA as well!

TAILS
The Jacksonville prison dog program was widely popular locally and was effective at helping both inmates and big shelter dogs. This program operated in several prisons and helped dogs from several shelters. FCNMHP started the local program and then successfully transitioned it to local partners for ongoing management.

Vet Tech Training Program
In Jacksonville, recruiting experienced vet techs was very competitive and it is expensive to train inexperienced people to be vet techs. Rick developed a plan to fill the community’s needs for vet techs and get help paying for training by partnering with human welfare groups that were seeking job training for their clients. This innovative plan is an example of how we can help you overcome whatever obstacles you face.

Cassat Hospital
In 2016 FCNMHP opened their Cassat Avenue Regional Animal Hospital, the largest nonprofit animal hospital in the southeast with a capacity to see 100,000+ patients and produce $5 million in revenue annually. Rick had total responsibility for the hospital, from the initial vision to site selection, funding, design, contractor selection, equipment and staffing.

Below is a list of some of the areas that we can be of services. This is just a partial list and we are willing to customize our services to meet your requirements. Please reach out and let’s discuss how we can help you be more efficient, effective and save more lives.
Program Evaluation & Design
As nonprofit professionals it is vital that we ensure the programs we invest in are effective and efficient at meeting our goals. Whether you need assistance in evaluating existing programs, or are looking to invest in new programs, we can help you to ensure your resources are invested optimally.
Program Utilization & Capacity Building
Do you have a great spay/neuter program but utilization is lacking? Or your s/n programs are not giving you the results you expected on impacting shelter admissions? We can help you fix it!
Strategic Planning
If you are driving somewhere you have never been, you are going to make sure you have a GPS to help get you there…so don’t run your organization without that same roadmap! A strategic plan is your overall guide for your organization to meet its goals.
Business Planning
A business plan fills in the details that will help you accomplish your strategic plan. Your strategic plan might call for a spay/neuter clinic or an additional shelter facility or an adoption center. A business plan details how you are going to operate that facility or program. Having a good business plan is one of the first steps to having a successful, lifesaving operation. Don’t be intimidated by this step--you have a friend that has written many successful business plans. Let’s discuss your plans today!
Hospital Planning & Design
Facility design must start far earlier in the building process than when most people typically begin; this has to be part of your process well before site selection. If you are planning a new facility of any type, we can help with the entire process from design to site selection to funding. We have experience planning, designing, building and operating high-volume facilities and we can use that experience to make this process easier for you.
Contract/Program Management
It is exciting when you receive a large grant or project to start a new program or provide new services, but those new programs come with more demand on your already-overworked team. We can help by getting new programs up and running smoothly before turning them over to your team members for ongoing management and oversight.
Community Assessments & Lifesaving Plans
Is your community ready to take their lifesaving efforts to the next level? Or are you just getting started in your efforts? No matter where your community or group is in their evolution to increased lifesaving, we can help. A community assessment reviews all of the resources, organizations and programs in a community and helps determine the next steps for that community to take in achieving their goals. This is often the first step in writing a community-wide strategic plan, and is a vital part of any community collaboration effort.
Professional Recruiting & Retention
The national animal welfare community is very small, and demand for finding the best leaders is friendly but fierce. Does your organization need help with a CEO, ED or veterinary position search? Finding the right person for these positions can be key to the success of your organization. We have experience with all of these, and can help you face the same challenges we have already overcome. We can also help with other management positions at large organizations.
Interim Positions
Some positions are too vital to leave unfilled while undertaking a search for just the right candidates. We can help you fill positions with temporary people who have the experience and knowledge to get the job done.
Speaking Engagements
Rick DuCharme has presented at more than a dozen animal welfare conferences on various topics and is happy to discuss how we can help you get your message across. With extensive experience speaking before elected officials, funders and animal welfare professionals, we can help you decide what speakers would be most effective for you and, if needed, recruit them.
Disaster Preparation & Response
Natural and man-made disasters impact our organizations and the people and pets that we serve. As a leader, it is your responsibility to ensure your organization is ready for the next disaster, whether big or small. We have the experience preparing for, and responding to, disasters, and are happy to help you prepare. Whether you are in a disaster-prone area or want to be ready to respond to disasters impacting others, having some simple processes in place before you need them is critical. With extensive experience in responding and preparing for natural disasters, we can help you be ready!
Funding
Founding and building a nonprofit into a $9 million dollar a year organization in pursuit of a fulfilling a vision and mission provided an amazing variety of experience and education. Facing and overcoming many challenges, but also finding and seizing opportunities, has provided Rick the experience necessary to tackle almost any challenge that you are facing. Most challenges that nonprofit organizations face start with funding, and building FCNMHP was no different. Rick has extensive experience with government, traditional and non-traditional funding sources.